How can we help you?

MXL microphones are the result of world-class engineering and manufacturing capabilities. They are designed to provide you with outstanding performance and exceptional value. A high quality studio microphone is one of the essential tools in any musician's equipment arsenal. To help you obtain the best results from your new purchase, we've provided some tips, tricks, and answers to commonly asked questions. We encourage you to review these materials.A LITTLE BACKGROUND INFORMATIONMXL condenser microphones use what is known as a cardioid pickup pattern, which is more sensitive to sound waves arriving at the front of the microphone as opposed to those arriving from the sides or rear. This characteristic makes the cardioid microphone an excellent choice for many recording applications. While there are no hard and fast rules for microphone positioning, the following setups are a good place to begin as they work well in many recording situations - though we encourage you to experiment.We also recommend you use a shockmount with your microphone. Shockmounts de-couple the microphone from the mic stand and the environment. With a shockmount, you minimize floor noise as well as any noise induced by people handling the microphone stand. Shockmounts should be considered "standard equipment" for all recording applications.Exercise care while handling your microphone. Your microphone's capsule is the "crown jewel" of the instrument. Avoid jarring or dropping the microphone. These vibrations - including tapping on the microphone to "test" its operation - can cause damage to the capsule and other electronics. You should also protect the capsule from wind. Avoid testing the microphone by blowing into it. If you find yourself recording an outdoor performance, you would be well advised to use a windscreen as protection for your microphone.The front of the microphone is always indicated by the position of the cardioid pattern symbol 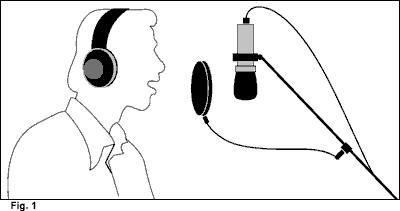 Ideally, you want to record vocals in a relatively "dead" room. If you clap your hands and get an echo effect, you should consider adding some carpet, blankets, drapes, or other sound absorbing materials. On that note, make every effort to avoid getting too close to the room's walls. These hard, reflective surfaces can easily complicate the recording process. Move your mic setup toward the room's center.Generally, you should position the vocalist roughly 6 - 8 inches away from the microphone. Getting too close to the microphone tends to increase bass response and can create problems with plosive sounds - those popping Ps, Bs, Ds, and Ts (more on this in a moment). Getting too far away makes the microphone more subject to picking up room ambience - a sound that creates the effect of the vocalist being in a bowl. While vocalists may need to move about in order to hit those high notes, make every effort to maintain a constant distance from the microphone, as this will provide the greatest tonal balance. (see Fig. 1)For the most part, the microphone's axis (or center line) should aim toward the nose and mouth to obtain the fullest sound. It's not a bad idea, however, to experiment angling the microphone slightly away from dead center so as to help minimize plosives. Further, you should always place a "pop" filter between the vocalist and the microphone, with the pop filter positioned 3 - 4 inches in front of the microphone. This will greatly increase your ability to achieve the most natural sounding recordings with minimal interference from plosive sounds. Fixing plosives with audio editing software often creates more of a problem than the plosive itself. Use of a pop filter will also protect your microphone's sensitive capsule - keeping it free from moisture caused by saliva projecting from the performer's mouth, and breath condensation. Remember... Good microphone technique, proper positioning, and use of a pop filter can make all the difference between a so-so vocal recording and a great one. 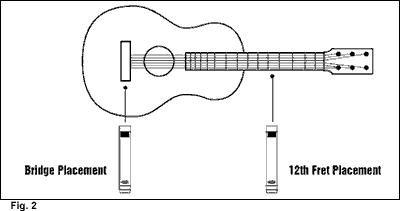 While it may seem obvious, your best results for capturing the acoustic guitar (or any similar stringed instrument for that matter) begin with a properly tuned instrument and strings that, while not old, aren't so new so as to create tuning issues due to stretching.There are two optimum points for microphone positioning - either near the bridge or by the twelfth fret. While it may seem natural to place the microphone in front of the instrument's sound hole, doing so usually increases low frequency response to the point of making the instrument sound "boomy."Twelfth Fret Placement: Placing the microphone roughly 2 - 4 inches from the twelfth fret and aimed directly at the strings will generally produce a warm, full bodied sound with good tonal balance. Using this technique, the sound hole's contribution will be moderated since the microphone is not pointed directly at it.Bridge Placement: Similarly, you can position the microphone so it is 3 - 6 inches from the guitar's bridge. This will generally produce a somewhat brighter tonal quality. You should also be prepared to experiment positioning the microphone slightly off-axis should you find yourself capturing too much low frequency response from the guitar's sound hole.The acoustical characteristics of your room will also have a pronounced effect on your results. A "live" room will produce an overall "brighter" guitar sound, while a "damped" room will produce more of a mellow tone. If you have two microphones, you may wish to experiment using one in close proximity to the guitar as previously described, with the second microphone on a stand a few feet away to capture the room's ambience. Blending the two sources can produce excellent results.

While the electric guitar can certainly be recorded directly, there are times when there is simply no substitute for the sound of a real amplifier. Guitar amps have particular gain stages that facilitate the popular "crunch" guitar sound. While digital modeling and processing systems certainly have their place, they may not have the same level of realism as the sound from an amplifier. A small guitar amp can be just as effective for this application as a stack, because you don't necessarily need to "crank" the volume. Instead, you want to increase the amp's initial gain to achieve the desired amount of overdrive.Typically, a guitar amp is close miked to achieve the highest direct sound. Placing the microphone roughly 4 inches from the grill, aimed directly at the center of the loudspeaker will produce the most "edge" to your sound.By angling the microphone slightly off axis and towards the wall, you can add more "room sound." Experimentation is a key factor in achieving the sound you are looking for. (see Fig. 3)Placement of the amp is another important factor. If the amplifier sits on a carpeted floor, you are more likely to reduce the amount of brightness in the sound. Similarly, elevating the amplifier off the floor may result in a loss of low-end. If you're looking for a big reverberant tone, placing the amp and microphone in the bathroom is another popular technique. The hard tiles and other reflective surfaces can do wonders for a dull sound. In this case, move the microphone back a few feet from the loudspeaker and crank it up! 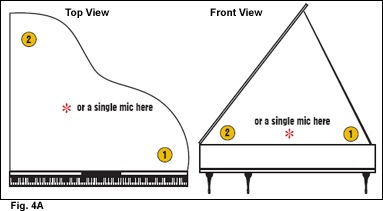 Like the piano, capturing the drums can be quite a challenge, if for no other reason than the fact that you must be very careful to avoid positioning the microphone(s) where they could be hit! Ideally you'll want a minimum of two microphones for this job, though a single microphone can be employed.Stereo Overhead Pair: Position the two microphones approximately 16 - 20 inches above the performer's head - separated laterally by roughly 2 - 3 feet and placed 5 - 6 feet out in front of the drum kit. Adjust the two microphone's Pan position so that you achieve a good stereo spread, though generally not hard left and right.(see Fig. 5A)Single Overhead Microphone: Position the microphone approximately 16 - 20 inches above the performer's head - centered in front of the drum set, and placed 5 - 6 feet out in front. The microphone's Pan position should be centered for mono drums. (see Fig. 5B)

For best results, record the drums in as acoustically "dead" a room as you can. If the room is live, the sharp attack transients of the drum kit will only become that much more difficult to capture if the room has hard, reflective surfaces - resulting in a muddy sound without any real definition. Further, you should always record the drums dry and add signal processing after the fact.

Did you find it helpful? Yes No

Send feedback
Sorry we couldn't be helpful. Help us improve this article with your feedback.